Wagner’s Ring Cycle looms over the city of Shanghai for the first time, thanks to the German government who brought Wagner’s music to Shanghai as part of its contribution to the Shanghai Expo 2010. Often labeled the “Green Ring”, this decade-old Robert Carsen production lends itself to a parable of the perils of untamed industrialization. The production, executed by the Cologne Opera, therefore also fits the “Better City, Better Life” motif of the Expo, which highlights the importance of sustainable economic development amidst our continued quest for rapid modernization.

The premise of the “Green Ring” rests upon the idea that the irresponsible mining of this precious natural resource sets in motion an inevitable tragedy as civilization becomes consummated by the excessive abuses of its agents, just as Alberich’s robbery in the Rhine triggers the series of events that lead to the fall of the status quo. In Carsen’s eco-minded vision, the irreversible purgatory wasteland, as revealed in the Norn scene, marks the predestined conclusion to an era where the illusion of free choices turns out to be excesses that destiny will eventually rein in, just as Wotan’s seemingly free choices are, after all, limited by the laws governing his conscience and the Gods. The freedom to industrialize, to contract and to rise at the expense of others has its consequences. And the singular consequence in Carsen’s allegory remains that profligacy, no matter what form, will eventually meet its due. While Carsen does not show any inkling of an alternative, his execution reminds me of George Bernard Shaw’s argument that the Ring is essentially a socialist’s critique of industrial society’s excesses and travails.

Musically, Markus Stenz managed a tight reading of Wagner’s score. Unlike Karajan’s Ring or Knappertsbusch’s Ring or Boulez’s Ring, this Ring did not follow 20th century’s personality-filled declension of Wagner’s work. Nor did Stenz seem to be the kind of conductor who tries to insert his own nuances and mannerisms into the music. Rather, he proved to be a faithful pace-keeper, exercising plenty of control and keeping Wagner’s wheel rolling without calling unnecessary attention to himself. The orchestra was well balanced and didn’t sound strained, despite having to perform, with no obvious change in its main lineup, over four straight evenings. Not forgotten but most certainly forgiven, the only major blemish in those four evenings was a glaring mistake with Siegfried’s leitmotif, as the hero entered the Gibichung palace, which sounded horrifically misplaced, both contextually and texturally, and suggested nothing to anticipate Siegfried’s entrance.

Greer Grimsley presented a Wotan who was tortured as fate unfolded around him. In Das Rheingold, the American bass-baritone unleashed a roaring lord of the Gods, with a fantastic and secure top. His lower registers proved more problematic as he was unable to project elegant lines without sounding feeble and un-godly. He recovered mostly in the second and third evenings and, in particular, delivered one of the most memorable and fatherly mountaintop executions heard in years. As Loge, Carten Suess was badly cast as he possessed a pretty, almost boyish lirico spinto sound that lacked the heroic juice expected of the powerful demigod of fire. Martin Koch’s Mime was badly cast for exactly the opposite reason: Koch’s voice was too heroic and had too much of a projection, sounded like Hagen, and left one wondering what went so wrong in the casting department. Catherine Foster’s Brunnhilde was fabulous, even though the top C in her battle cry scene was rendered with too much of a staccato, a manner that seemed a bit artificial and almost too disconnected.

Lance Ryan, the reigning Siegfried at Tankred Dorst’s production at Bayreuth, sang a fabulously courageous Siegmund. He began the spring duet with aplomb and composure, and contributed much sappiness before Astrid Weber’s Sieglinde joined the melodic party. After taking a day off, Ryan returned as Siegfried in Götterdämmerung. He did not disappoint by navigating the technically impossible third act with plenty of gusto and with apparently zero effort. To top the night off, he lengthened the top note in “Hoihe”, with Stenz happily indulging his tenor for the extension. The showmanship could be repelling to some, but it’s difficult to argue against listening to a supremely confident Siegfried who can carry his voice into the far corners of the house.

If Grimsley’s voice was moribund but serviceable, Stig Andersen’s certainly was not. To be sure, Andersen’s voice was a refined one, and plenty of evidence could be found showing a methodical meticulousness in his phrasing and breath control. Unfortunately, that refinement seemed pointless as Andersen’s voice, perhaps due to age, was drowned out by the weight of the pit sound. In Siegfried, he labored through in the eponymous role with some visible strain. When Andersen seemed comfortable enough, he lacked any blood-boiling thrill. In the last scene, his voice was, understandably so, severely frayed after four hours of competitive singing, but was so drowned out by Foster’s fresh Brunnhilde that the soprano sounded as if she consciously tried to gear down for a less disturbing dynamic imbalance. Scatters of boos were directed at Andersen at the curtain calls, though they were largely overwhelmed by a warm response that seemed as much to laud Andersen’s performance as to devastate the unnecessary negativity, as if to prove the point that no Siegfried who could labor through four-plus hours of heldenlabor should be maliciously trashed.

By my book, there is no such thing as a bad Ring, and this one is no exception. A truly excellent Ring, at least to me, encompasses great musical execution, spectacular pyrotechnics (of which there was plenty), and a stage that, as James Levine has said many a time, lets Wagner’s story tell itself. Carsen’s green allegory could sometimes be distracting, but it neither impedes the music nor the singers who attempt it. By those counts, this Ring is a most excellent one. 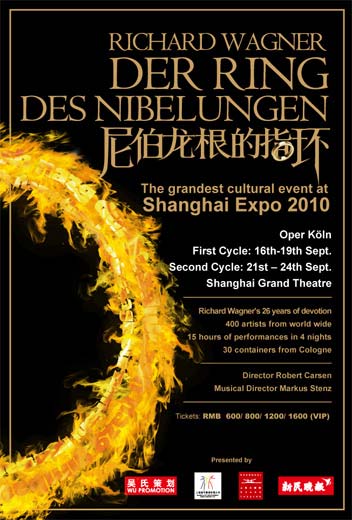