Background. The comedic story tells the lives of Gong Jing (龚敬) and his wife. He was a high government official who often sought help from her when he faced issues at work. Well educated and highly intelligent, his wife obliged and effectively became the mastermind behind Gong. Without an heir, Gong was cajoled by his deputies into a farcical plan whereby he would secretly harbor a concubine Xiao (肖氏) behind his wife. His wife found out about his devilish little plan, and briskly sent the concubine away. When the husband learned that his plan was foiled, he begged for forgiveness. After considering their marriage and, more importantly, Gong’s political career in relation to the country, she relented and brought Xiao back in a dramatic turnabout.

The entire story has 36 chapters, of which only five were presented in this kunqu production. As far as I understand, a complete staging of all 36 chapters has not been attempted by any opera troupe in modern Chinese history. The story presented in this kunqu production is actually a small episode of the entire story, which tells the life story of Guo Ziyi (郭子仪), whose life is significantly influenced by Gong and his wife. Guo’s success extended to his children, who at his 60th birthday gathered around him and placed their scepters — a symbol of authority in ancient China — at Guo’s bedside.

Performance. Playing the role of the wife was Wang Fang (王芳), a two-time Plum Blossom prize winner. Her portrayal controlled the tempo and the dramatic arc of the evening. Twice in the evening, she uttered the phrase “please follow me to my chambers / 随我进来” to seduce her husband. She said it in a most sultry voice in a most titillating posture without bordering pornographic or slovenly: this represents seduction at its best. In the final scene, after she sent her husband to the concubine’s chamber, she looked simultaneously satisfied and consumed, knowing that while her plan to save her marriage and perhaps the larger context of her husband’s political career succeeded, she had to face the reality that her husband would be sleeping with another woman. As she retired to her chamber, her body shivered uncontrollably, as if finally feeling the pain of her decision. Zhao Wenlin (赵文林) portrayed an innocent but remorseful Gong, as if begging for the audience’s forgiveness, while Weng Yuxian (翁育贤) played an angelic Xiao with an irreproachable demeanor and a cloudless understanding of the situation. As one of Gong’s deputies, Tang Rong (唐荣) labored as a workable muse but lacked a definitive inhabitation of the role. Fatally, Tang’s vocalism carried too strong a Beijing Opera flavor to be considered a serious kunqu performer.

This performance is part of a series of performances celebrating the tenth anniversary of Kunqu’s selection by UNESCO as a Masterpiece of the Oral and Intangible Heritage of Humanity. The series includes plenty of delicious goodies, some of which will be reviewed later here at TFS. 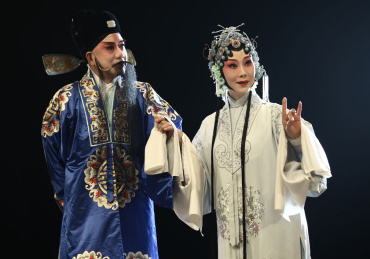 Wang Fang (王芳) and Zhao Wenlin (赵文林), in A Collection of Scepters.

One thought on “A Collection of Scepters (满床笏)”