When Wagner conceptualized the music drama, he was heavily influenced by the works of Schopenhauer. The central theme of Schopenhauer –to achieve inner peace through renouncement of desires – seems most evident in Act 3, when Tristan longs for release from his tormented longing for Isolde, or in Act 2, when both Tristan and Isolde seem willing to obtain fulfilment through death. The metaphysical realms of these depictions are a boon to experimental theatrical directors, who to portray these realms use a variety of fantastical devices, whether color, as in Dieter Dorn’s production at the Met; or video, as in Peter Sellars’ production in Paris; or even geometric shapes, as in Katharina Wagner’s production at Bayreuth. Photo-realism is mostly avoided.

Paul Brown’s set in this Graham Vick production is contemporary, reminding us of a luxurious cabin in the early to mid-Twentieth Century. This photo-realism robs the audience of a chance to experience, perhaps through fantastical stagecraft or music, the unknowable reality. Tristan’s death is handled with the hero leaving the stage by going through a door and into a crowd of zombies. After Liebestod, Isolde likewise enters that door, signifying her rejoining with Tristan. In Acts 2 and 3, when the two lovers utter anything in the libretto that points to or sounds like death, stage extras would walk across the stage and scatter flowers on a casket, placed prominently in the middle of the stage. Or, before the first note is sounded, Tristan’s coffin is nailed. Or, in Act 1, the shepherd’s herd is reenacted by actors crawling in four limbs. Or, throughout the entire evening, a lamp the size of a SMART car is used to literally highlight a part of the stage relevant to the ongoing libretto. Even if light (and darkness) has symbolic meaning in the story, why does this have to be labored to such repetitious pathology? These depictions seem almost all too overt and pictorially descriptive, in stark contrast to an ambiguously (deceptively?) represented world or, to a false representation of what we believe as the physical world (?). The production here seems insensitive to the background history behind the piece.

But Tristan und Isolde shines or dies with the vocal cast and the orchestra. With that, the star that outshone all others was Stephen Gould, whose imposing voice, as Tristan, impressed immensely. His handling of the libretto’s words was deutlich, with the kind of regal clarity befitting the voice of a professorial Bundestag politician. Tristan’s fiendishly long phrasings and endings were handled with care. Unlike many North American heldentenors, Gould’s diction was natural and unforced. His top rang with the sort of metallic gloss one finds on a sports car freshly wheeled off from the factory. Compared with his Siegfried I heard in 2009, Gould seemed much more willing to control and pace his vocal output at the outset to avoid coarse shouting closer to the end. Significantly, he probably now owns one of the densest and most stentorian outputs at the lower end of Tristan’s tessitura, not just among his contemporaries but every recorded Tristan I have come across. By the midpoint of his great monologue in Act III, it was clear that he still had plenty of reserve power and did not sound tired at all. A high A-natural was ever-so-slightly mishandled in “Sehnsucht, zu sterben”, in his monologue lamenting his betrayal of Marke, but it neither disturbed the audience nor the singer himself.

Nina Stemme has perhaps the most reliable and steady Wagnerian voice today. She never shouts, and even if it sounds like shouting she does not look uncomfortable or overparted. One of her greatest gifts is a consistently perfect pitch, which allows more of the intricate chordal and chromatic interplay between Isolde’s voice and the orchestra’s to come through. Her legato passages, especially as the drama built up to the extinguishing of the light, oozed like warm cheese. The reliability of her voice could present a liability as well, as it lacks that tiny bit of fragility that, in my opinion, could be desirable in Isolde: after all, Isolde has to face loneliness, as well as a dying/dead Tristan all by herself. Her calm and steady “Mild und leise” at least added to, though not definitively, a proof of that theory. That being said, singing with reliability is miles better than singing with an undisciplined shrill.

In the Act 2 duet “O sink hernieder”, the vocal outputs were equally matched. Their melodic lines were handled with sincerity and aplomb, all the while navigating together with heart-melting unity. The overall musicianship of the rest of the cast was of the highest caliber. Ekaterina Gubanova’s Brangäne carried the day with vocal purity and dramatic persuasion. Ryan McKinny’s Kurwenal was rather invisible in Act 1 but warmed up enough to voice clearly and resolutely in Act 3. Jörg Schörner, as Melot, sounded properly angry and stole some luster from Tristan, as it should be. Matti Salminen starred triumphantly as Marke, portraying the king with regal composure in Act 1 and wretched devastation in Act 3. At curtain call, there was a short ceremony in which he was feasted with applause and flowers, as the evening’s performance turned out to be last stage performance.

Donald Runnicles, usually a reliable Wagnerian, conducted an orchestra who, for the most part, lingered without much to say. Passages that are supposed to sound ruhig came out lifeless. Heftig passages appeared grotesque. Solo violins and violas had no problem pumping out the right phrases but sounded coarse and tired. The star of the evening, crucially, was Chloe Payot, whose handling of the cor anglais passages was magnificently klipp und klar. In the orchestra’s defense, the general lack of a cohesive soul in the playing could be due to an exhausted orchestra having done evenings of Mozart (Abduction), Verdi (Trovatore) and Puccini (Tosca) on consecutive days prior to this Tristan performance.

Guillaume Tell seems to be enjoying a mini renaissance after years of neglect (outside of Pesaro anyways). New productions have popped up recently in Amsterdam, Liège and Torino, and more new ones will be staged in Cardiff, Graz, Monte Carlo and Covent Garden. Part of it is due to the Florez-led revival of Rossini appreciation, but part of it is simply a matter of time: a tragic overdue.

Florez, as good as he has been in Rossini roles, would have no business in Rossini’s last opera. The major tenor role here, Arnold, belongs to a heavier lyrical voice, delivered in Munich majestically by Bryan Hymel, who is fashioning himself as the go-to person for French grand operas, having recently done Robert in Robert le diable and then Aeneas in Les Troyens. Between his Aeneas in 2012 and now, Hymel’s French diction has improved remarkably. With Asile héréditaire, he brought down the house with incredible breath control, fiery output, and pulsating pacing. More importantly, he delivered not with voix mixte but with a full and punchy voice.

The set, by Antú Romero Nunes, has nearly nothing other than enormous tubular pipes that descend, spin and angle to assemble into shapes, in a stage concept not unlike Robert Lepage’s Ring at the Met. For example, in the militarization scene, the pipes would descend and present themselves as though they are gun barrels. In Altdorf, the chapel is depicted with pipes angled at each other, as if presenting themselves as two slanting sides of a chapel roof. Trees in the forest are depicted with plenty of the pipes floating sturdily in midair. The difference here is that, unlike Lepage’s concoction, the pipes are not treacherous walking hazards. Nor are they making crackling noises that inhibit listening. In other words, the pipes are not so obtrusive as to affect the listening experience; it is simply a way, albeit an expensive one, to define a set and make an impression.

As Jemmy, Evgeniya Sotnikova was fine, sweet and persuasive. Michael Volle, in the eponymous role, was fine dramatically but couldn’t muster enough tonal color and lyrical beauty to be a truly great Rossini singer. More problematically, his voice often disappeared in the ensemble. Erika Grimaldi sang with sweet expressiveness in Matilde’s aria Sombre forêt, or rather Selva opaca – she was flown in as a last minute replacement for the indisposed Marina Rebeka and could only sing the opera in Italian (she is currently singing the Hapsburg princess in Graham Vick’s production in Torino). Dan Ettinger was a steady hand and delivered what Rossini promised: dramatic grandeur and joyous bliss. Some overt massaging of the score was done: the overture, instead of being played at the beginning, was moved to after the intermission, before which much of Act III has already been done and up to the shooting of the apple. However, in some perverted ways, this rearrangement worked, as the pulsating Swiss Soldiers March served to provide a cliff-hanger of a drama to the apple shooting scene. It also provided some context to the fascinating composition, which heretofore was relegated as an inconsequential show piece. Traditionalists be damned.

The production turns out to be a dark and cynical take on the idyllic themes of love, family, liberty and country. Act I comes with no dances, as would be expected from this Rossini opera. The showy grandeur and Schiller’s emphasis of nature seem coolly assailed by the listless roboticism of the tubes. Yet somehow the sheer presence of the gigantic tubes defines the scale of the opera without the need for an elaborate set and/or a show-stopping dance scene. Equally, the destructive nature of the tubes serves somehow to highlight an important theme in Schiller’s omen: that of the unpredictable and destructive power of the political man. In that respect, as perverse as it may seem, Nunes and Munich found an interestingly workable formula. 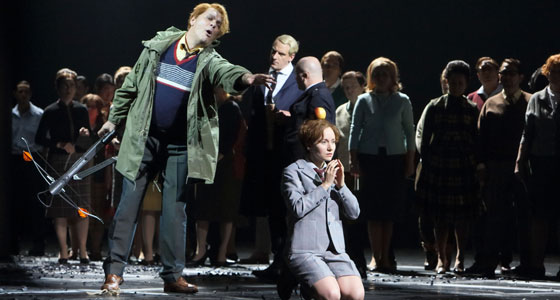 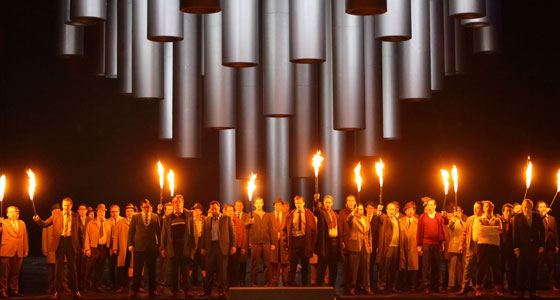